If your idea of an easy road trip is taking a scenic, slow-paced drive through one of Oregon’s most vast and blissfully uncrowded landscapes, you’re in luck. Eastern Oregon’s most off-the-beaten-path towns are eager to see you — and serve you — with their juiciest prime rib and burgers, ice-cold ales, tasty snacks and fresh takeout fare perfect for a picnic at a nearby park, lake or trail. Along the way, you’re sure to find delights and surprises in these rural communities — which may be small in size, but they’re big on heart. Out of respect to local communities dealing with COVID-19, consider staying local until the time is right to visit. Here are five almost-secret bars for refreshments on your next Eastern Oregon adventure.

Fifteen miles north of La Grande, Summerville is a lush oasis at the foothills of the Blue Mountains. (Photo by Joni Kabana)

The scene: As you pull up to Summerville Store & Tavern, a lush green valley unfolds around you, with the Blue Mountains — capped with snow in winter — forming a dramatic backdrop to the west. Inside, past the convenience store, you step into the cozy tavern, its long bar lined with retro stools, TV screens airing sports, a pool table, and a small stage where musicians often perform on weekends. In addition to the usual beer signs, the tavern’s walls may display local art for sale.

When longtime local Sheri Rogers bought this laid-back, tin-roofed service station, post office and convenience store in 1995, the bar in back was just a no-nonsense watering hole. But Rogers envisioned more of a gathering spot where folks of all kinds could meet and mingle and enjoy a tasty meal. “Our food service is what we’re most proud of,” she says. “The flavor of our tavern is really more like a small community cafe.”

What’s special about it: In addition to the daily specials, Summerville Tavern hosts a wildly popular Pizza Night the first Saturday of every month. Baked with house-made dough, these pies can be customized, but the one piled high with chicken and veggies over a cheese-and-garlic white sauce base is a good bet. From the regular menu, burgers are a specialty, with the bacon cheeseburger a standout — it’s topped with thick slices of hardwood-smoked bacon from Pendleton’s acclaimed Hill Meat Company. You’ll always find brews on tap from Terminal Gravity in Enterprise, and lately it’s also been featuring the heady Oregon Fog Hazy IPA from La Grande’s Side A Brewing.

When singers and bands perform, you can almost always count on a lively crowd. The tunes range from rock to country, and Nashville-based crooner Tim Hadler usually performs a couple of times a year. The tavern also hosts benefits for local causes and special holiday celebrations. Although it is a bar, it’s also family friendly. Minors are welcome in the main tavern area for breakfast and lunch (until 3 p.m. each day), and later in the day, families can sit and enjoy their meal at a table in the adjoining convenience store. “Our goal is to take care of everyone who comes through,” Rogers says. 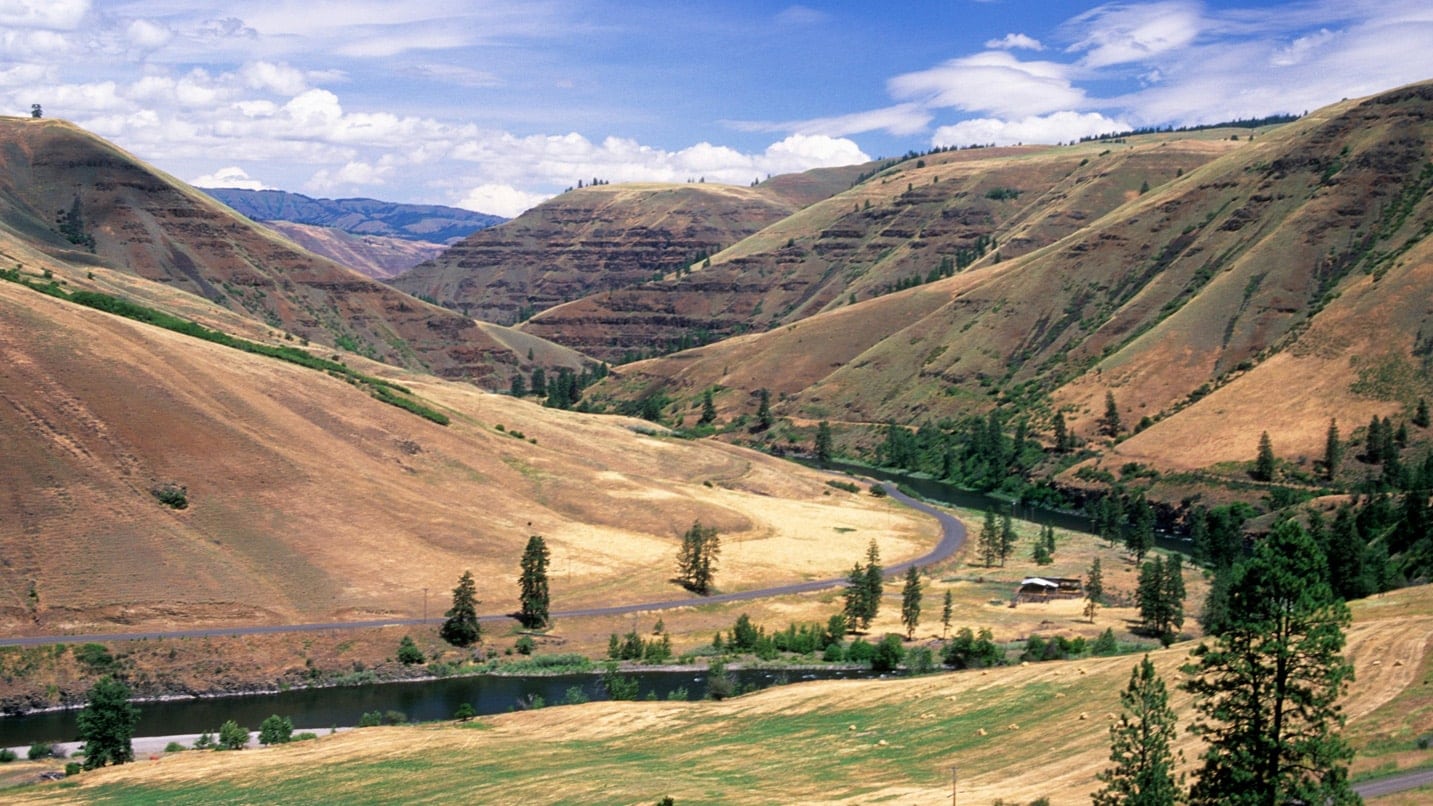 In the far northeastern corner of the state, Troy is a recreation paradise at the confluence of the Wenaha and Grande Ronde rivers. (Photo by agefotostock / Alamy Stock Photo)

Getting there: From La Grande and exit 261 of Interstate 84, take Highway 82 about 10 miles north to Imbler, and turn left onto Summerville Road. You’ll come to the Summerville Tavern on the left after 3 miles.

The scene: In the far northeastern reaches of the state, in a spectacular canyon at the confluence of the Wenaha and Grande Ronde rivers, you’ll discover Wenaha Bar & Grill, a welcoming waystation that draws outdoors enthusiasts from all around the region. Back in the day, Creedence Clearwater rocker John Fogerty even had a little vacation cabin in these parts.

The Wenaha Bar & Grill is part of the Troy Resort, which offers a range of pleasant, inexpensive accommodations, including three cabins, three guest rooms, a trailer, 20 RV spaces and 15 tent sites. Whether you’re spending a couple of nights or just passing through for the day, it’s a friendly stop for a meal, although the indoor dining space is pretty cozy and therefore closed during the COVID-19 pandemic.

But don’t let that dissuade you from stopping by. “Right now all our food and beer are to go, but we have plenty of outdoor seating — you can enjoy your meal overlooking the river or sitting under a big shade tree,” says Doug Witherrite, who’s been operating the property with his wife, Karla Johnston, since 2017 but points out that this Old West-style timber-frame tavern has been around for more than a century.

What’s special about it: Even by Eastern Oregon standards, the Wenaha Bar & Grill enjoys a truly enchanted riverfront setting where bald eagles have been known to soar overhead. You might plan a meal around fishing for steelhead, hunting for elk, rafting the two rivers or hiking the pristine trails that snake through the Wenaha-Tucannon Wilderness, part of Umatilla National Forest.

The kitchen serves food from early in the morning until around 8 at night. “We’ve got everything from meat and eggs in the morning to fish ‘n chips and burgers at night,” says Witherrite. “Regulars really come back for our chicken-fried steak — that’s a big seller — and also the Wenaha burger, topped with lettuce, tomatoes, onions, pickles, bacon and cheese.”

There’s also a little convenience store that sells ice, propane and light snacks, and a walk-in freezer where hunters can store their bounty. Cell service is nonexistent in this off-the-grid corner of Oregon, and the resort and bar are cash or check only, so arrive prepared. The nearest ATM is a good 50 miles away. 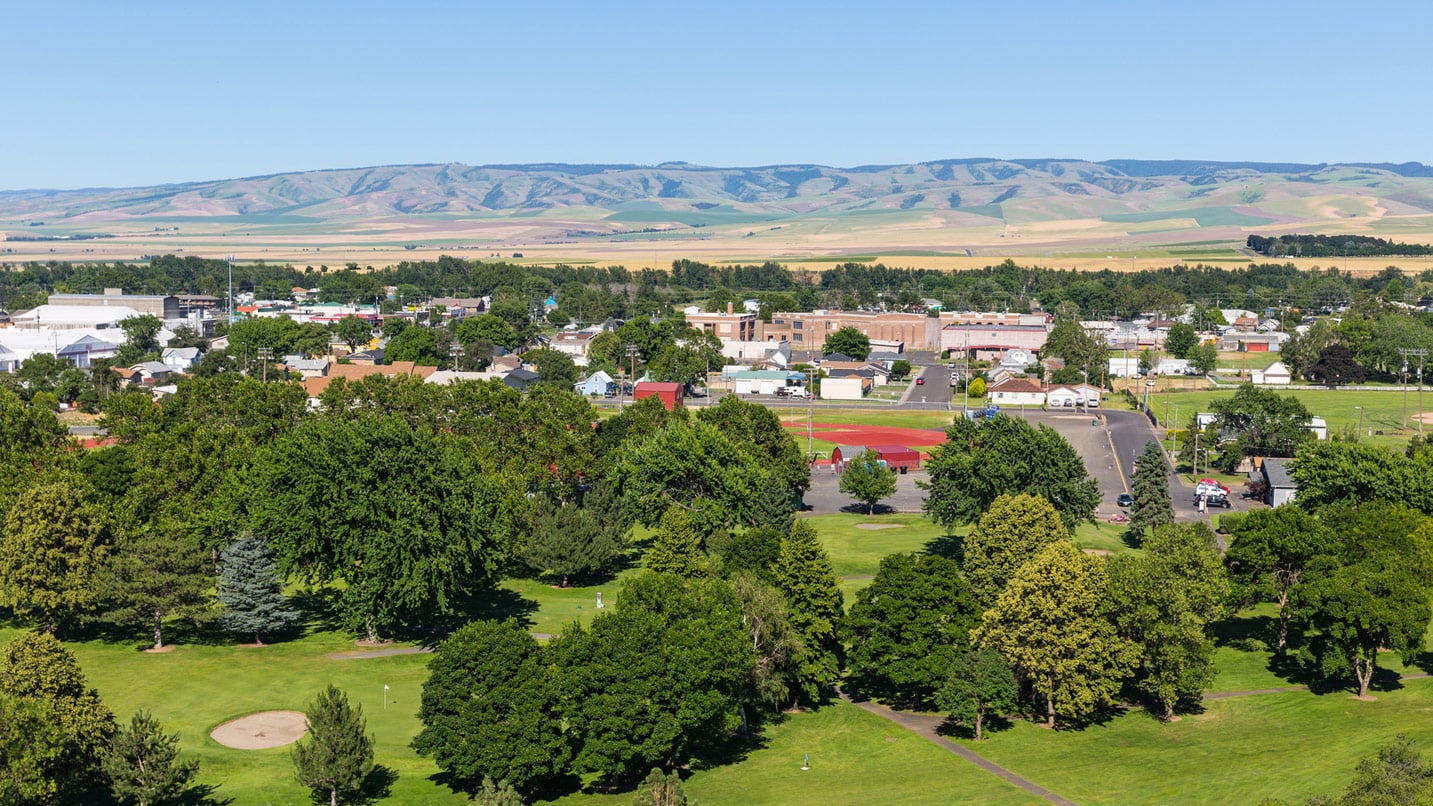 Milton-Freewater is home to the burgeoning Rocks District winegrowing region as well as an iconic Irish bar. (Photo by Joni Kabana)

Getting there: All of the routes to Troy are scenic but slow, involving unpaved rural roads, so take your time — getting here is part of the adventure. From Enterprise, drive 33 miles north on Highway 3, and then follow Flora Lane, Redmond Grade Lane, and Troy River Road west for about 16 miles down into the heart of Troy, where you can’t miss the resort. For a similarly photo-worthy alternative starting from the town of Wallowa, follow Promise Road 17 miles north to Wallupa Road. Continue another 13 miles to Troy Road, and follow it 7 more miles alongside the Grande Ronde River directly into town.

A Warm Welcome at the 45th Parallel

The scene: Nestled in a wooded valley along U.S. 395 in the minuscule unincorporated community for which it’s named, the Dale Store and Service Station is neither a bar nor a restaurant per se, but it is an atmospheric stop for snacks, beverages, simple car repairs and friendly conversation. “It’s a handy place to get ice cream and a cold pop or a cup of coffee,” says Georgia Burnett, who occasionally works behind the counter when longtime owner Butch Phelps is off duty.

Opened in 1892 and set inside a historic white-clapboard building with a hand-painted sign, two old-fashioned gas pumps and a pale-green gambrel roof, the Dale Store — which is located just a stone’s throw south of the 45th parallel — is an invaluable resource for road-trippers making their way along U.S. 395 through rugged and remote Umatilla National Forest. Roughly midway between John Day and Pendleton, it’s one of the only places in the region to refuel on gas and basic groceries, including ice-cold beer and prepackaged sandwiches. “Butch also does car maintenance once in a while,” says Burnett. “If you have a flat tire or something simple, he can fix it.”

What’s special about it: The Dale Store really stands out for its colorful decor and — as the local post office — its wall of 24 historic post office boxes. You can also pick up old postcards that show what the place looked like back in the day, along with camouflage Dale Store hunting caps, which are highly useful in these parts. Note the extensive collection of taxidermy on the wall, especially elk. Phelps and his sons harvested most of the animals now on display, and the store is also an authorized Oregon Department of Fish and Wildlife (ODFW) agent for purchasing fishing and hunting tags and licenses. Until 2008 it also housed the North Fork John Day Ranger Station, but that facility relocated 17 miles north to the town of Ukiah.

“We get a lot of people driving through, because we’re located on such a nice scenic route,” says Burnett. “Lots of bikers in spring and summer, plus cattle trucks, semis, and all the deer and elk hunters.”

Getting there: Dale is one of those “sneeze and you’ll miss it” villages, but it’s easy to spot the Dale Store on the north side of U.S. 395 as you pass through. Keep in mind, however, that web searches for the store sometimes yield inaccurate results. Dale is 17 miles south of Ukiah and 25 miles north of Long Creek. From either John Day to the south or Pendleton to the north, allow about 75 minutes to get here.

The Emerald Isle of Milton-Freewater

The scene: Kelly’s Restaurant & Lounge is easy to spot — a green pole with a large leprechaun on its sign towers above the parking lot beside this convivial roadhouse. “My mom founded it in 1998 — it’s always been in the family,” says Shannon Hall, who took over the place when her mother, the locally beloved Katherine “Kat” Kelly, passed away from cancer in 2012. Known for nightly happy hour and weekend brunch, it’s a fun place to meet the many ranchers, farmers, viticulturists, barbers and artists — more than a few of them of Irish lineage — who gather here regularly. 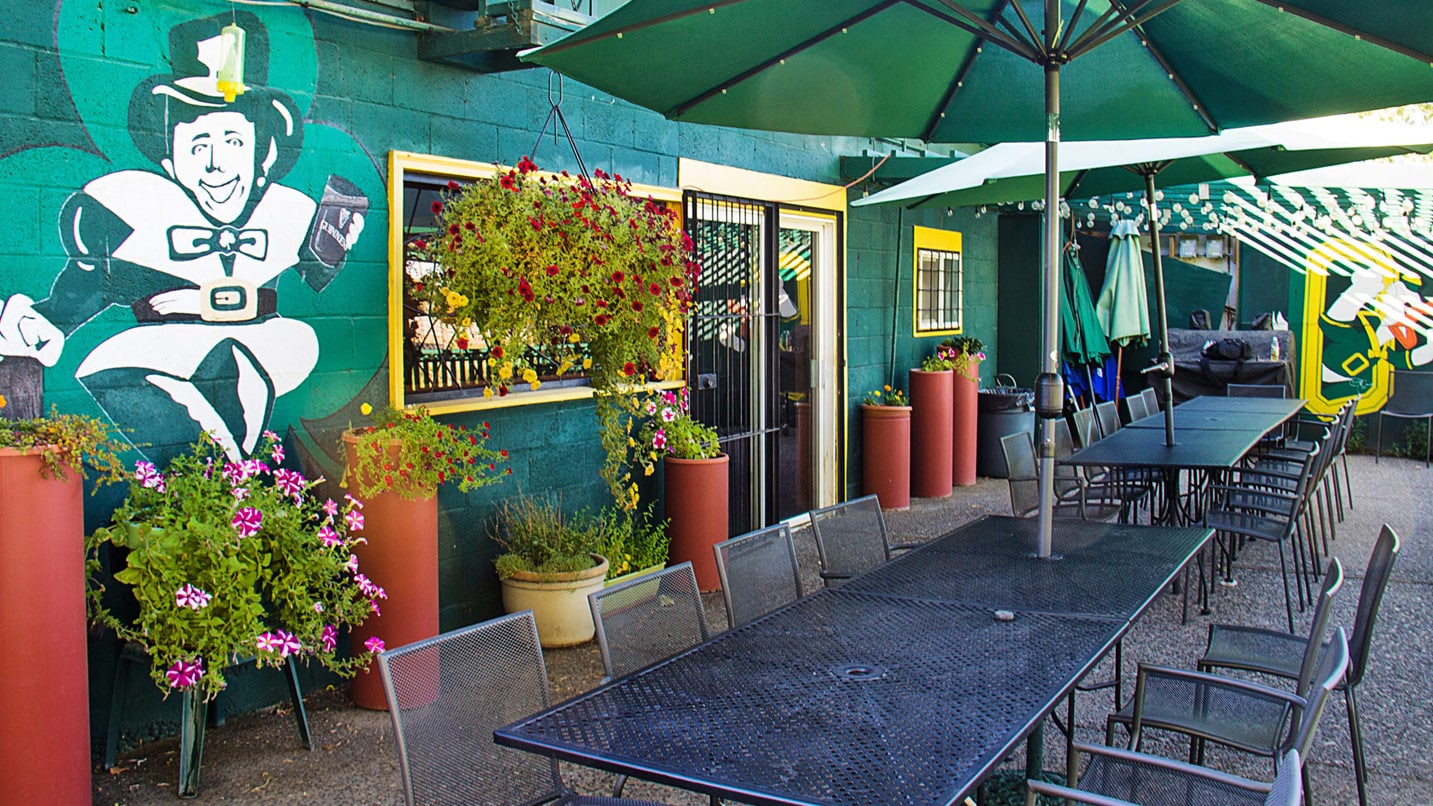 Enjoy a cool pint of Guinness or a Bloody Mary with your brunch at Kelly’s Restaurant & Lounge, a favorite gathering place in Milton-Freewater.

Inside, on walls fashioned out of wood planks from the family barn, you’ll see placards displaying irreverent Irish sayings, vintage Pendleton Rodeo posters, a digital St. Paddy’s Day Countdown clock, and signs advertising Guinness, Tullamore Dew and other famed Irish elixirs. There’s also extensive outdoor seating that’s lovely for whiling away a hot summer afternoon. “We have a patio that overlooks the Blue Mountains,” says Hall. “And we took some parking spaces out and fenced in a new area that we call Kelly’s Corral. It has misters to keep you cool when the temperature climbs.”

What’s special about it: Kelly’s throws quite the amazing party on St. Patrick’s Day, but any day of the year, it’s a go-to for warm and welcoming Irish hospitality. Weekend brunch — featuring corned-beef hash, egg-and-pancake combos and other stick-to-your-ribs fare — is a beloved tradition in these parts, thanks in part to the expertly crafted Bloody Marys. Here in the Rocks District winegrowing region, local wine is celebrated, but Kelly’s tends more toward beer and cocktails. “We always have Guinness on tap, along with some popular Oregon craft beers,” says Hall, “and we carry plenty of great Irish whiskeys.”

Another big draw is the prime rib, cooked and smoked slowly on a Traeger grill, which you can best enjoy with a dollop of creamy horseradish sauce. Also note the blackened rib-eye steaks and beef shepherd’s pie, along with several intriguing daily specials — maybe cheesy beer-and-bacon soup or chicken cordon bleu sandwiches.

In addition to St. Patrick’s Day, the place is famous for its annual Kat Kelly Memorial Party, which is held in honor of the bar’s founding matriarch and raises money for local charities. Bands also occasionally perform at other times, and there’s karaoke on Friday nights, but live entertainment and Kelly’s annual gatherings are on hold until the COVID-19 pandemic ends.

Getting there: You’ll find this colorful establishment on the east side of Highway 11, 2 miles north of Milton-Freewater’s charming downtown and acclaimed wineries.

Editor’s note: Call businesses to confirm hours and offerings before you visit. Also check the status of the county’s phased reopening before you travel. Note that “baseline” means to-go only. Face coverings are required in all of Oregon’s public indoor spaces.