If you haven’t seen this place, you need to go.  Originally a Chinese medical clinic, general store, community center and residence, Kam Wah Chung gives you an incomparable glimpse into the past. This remarkable site, a National Historic Landmark, is located in the town of John Day, and includes a museum and a separate interpretive center.

The museum was built in the 1870s, possibly as a trading post.  This tiny, unassuming building became home to two Chinese immigrants, Ing “Doc” Hay and Lung On.  Both became locally famous:  Lung On as a general store proprietor and businessman, and “Doc” Hay as a practitioner of herbal medicine.  For 50-some years, the building was a social, medical and religious center for the Oregon’s Chinese community.

An ADA-accessible interpretive center across the street from the museum is open daily.  In 2011, the center opened a new exhibit, detailing the life and times of Doc Hay and Lung On.

Map
The Dayville Mercantile Bike Shop is open and ready for business. Enjoy a full service shop with rentals (they have four Trek 8.5DS as [...]
207 W Franklin Ave
Dayville, OR 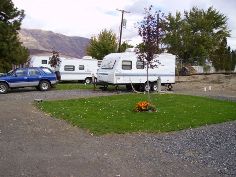